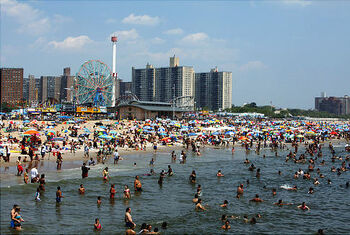 Coney Island is a peninsula and beach in southern Brooklyn, New York. It's best known as a resort and amusement area. At its heyday in the early 20th century, Coney Island attracted several millio n funseekers each year. Although its popularity has waned in recent years, it is still a place of nostalgia, memories a nd m agic to many New Yorkers and visitors from around the world.

Coney Island has a quirky, wacky vibe you can't find anywhere else in New York. It hosts the festive Mermaid Parade, which is known for extraordinary marine costumes as well as the occasional partial nudity. Thousands of mermaids and sea creatures of every shape and size are represented at this family-friendly event.

It is also the home of Nathan's Famous hot dog stand and the annual Nathan's Hot Dog Eating Contest which takes place during the day on July 4th every year. The contest started with only a dozen people, but has turned into an internationally recognized event watched by thousands of people around the world.

Some awesome old photos and videos of Coney Island

Community content is available under CC-BY-SA unless otherwise noted.
Advertisement